Le Bourget, France ( Eurocopter Press Release ) - The EC 135 is a real record collector : in 1996, just 18 months after its maiden flight, it gained its type certification. In the same year it won the Flight Aerospace Industry Award for the most innovative helicopter - it is the quietest helicopter in its class. One year later 100 EC135s had been sold and today the hundredth aircraft was delivered. The customer is the helicopter unit of the Bavarian police force, which has thus received the eighth of nine machines ordered. Altogether more than 160EC 135s have been ordered worldwide. 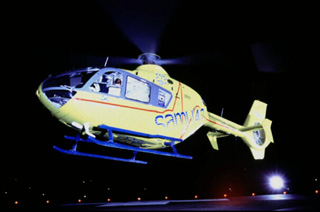 During the Le Bourget Show the EC135 with the series number 100 was handed over to the Bavarian Police during a little celebration on June, 16. Patrick Gavin, President of Eurocopter and Dr. Siegfried Sobotta, Co-President of Eurocopter handed over the keys to Franz Brosch, Member of the Internal Affairs Committee of the Bavarian Parliament and responsible for law enforcement.
This rapid increase in delivery frequency mainly reflects the introduction by Eurocopter Deutschland (ECD) in Donauwörth of station-based production for the EC135. Final assembly of the helicopter is broken down into thirteen individual sections at which specialized teams carry out tasks such as fitting the landing skids, cable routing and mounting the engines. This considerably increases the speed, reliability and efficiency of the assembly process. Moreover, large-scale use of fiber-reinforced composite materials which are bonded together on the EC135 eradicates the need for time-consuming re-work on the surface structure, as required after individual metal components have been riveted together.
Attentive and active product support by Eurocopter Deutschland GmbH ensured customer satisfaction right from the outset of series production. Since then the entire fleet worldwide has clocked up around 30,000 flying hours.
The Bavarian police and its helicopter unit provide a perfect example of modern police working methods and are an especially important customer for Eurocopter .Back in 1971 Bavaria purchased the first BO105 for police duty from Eurocopter's predecessor company MBB and later expanded its fleet to altogether seven BO105s and four BK117s. In 1995 a thermal-imaging camera and night-vision devices were purchased for the first time for use by the police in Germany. Bavaria was also pioneering in the way it financed its helicopter fleet, in the form of a leasing scheme.
The new EC135s, which are replacing older models, are ensuring that the police helicopter unit in Bavaria will remain one of the most modern in the world, ready for every mission. The extensive equipment package contains a gyroscope-stabilized thermal and daylight imaging camera, weather radar, digital and night-vision cockpit system, electronic map systems, GPS, autopilot, infrared searchlight, rescue winch, load-bearing hook and rescue litter.