Marignane, France ( Eurocopter Press Release ) - The worldwide success achieved by this best-selling light helicopter is confirmed by the 200 aircraft sold since its commercialisation less than four years ago. Close to 80 customers from 30 countries have already placed their confidence in this helicopter.

One of the keys to the success of this new-generation, five-seater helicopter is that it was designed from suggestions put forward by customers (ECat Meeting) and it has turned out to be the best multi-purpose helicopter in its category. Its endurance, hover flight performance and payload/range ratio largely outpace those of its competitors.
The dynamic systems, power plant, airframe and avionics on the EC 120B Colibri all feature the latest technologies.
The EC 120B Colibri has a "Spheriflex" main rotor head that ensures easy-maintenance. The eight asymmetrical composite blades of the new Fenestron give this helicopter a noise signature 6.6 dB below that required by the ICAO. It is the quietest helicopter in its category and it also has an engine with low-polluting emissions.
Moreover, its resolutely modern power plant, a Turbomeca Arriel 2F, 504 shp/376 kW, engine has full authority digital engine control. Its maintenance is cost effective and its fuel consumption is very low.
Most of the EC 120B Colibri airframe components are made from composite materials. It has a wide cabin (the largest in its category) that can seat up to five passengers. It is particularly ergonomic and comfortable. The fuel tank has been divided into two cells to leave room at floor-level for the baggage compartment, which offers a volume of 0.8 m3 and can be accessed from both inside and outside.
The EC 120B Colibri is the first single-engine helicopter to meet the safety requirements of the new JAR 27 regulation (structural strength of the crew and passenger seats and of the fuel system).
It also features a number of innovations such as a clearly laid-out instrument panel with color screens  VEMD (Vehicle and Engine Multifunction Display)  to display the main vehicle and engine parameters. This system is located in the center of the instrument panel which has made it possible for this helicopter to obtain single-pilot certification, with the pilot in the right or in the left seat.
The VEMD uses a symbology very similar to that of conventional indicators to display the main vehicle and engine parameters as well as the First Limitation Indication (FLI). The synthetic data display on the screen coupled with a first limitation aural alarm considerably lightens the pilot's workload. It is also an important safety factor in that it ensures better mission conduct, especially for work with underslung loads.
The maximum takeoff weight of the EC 120B Colibri has been increased to 1715 kg which means that the payload is now more than 750 kg over a distance of 730 km at a speed of 230 km/h and that an underslung load of up to 700 kg can be carried.
Since the beginning of this year, three new optional installations are available, which extend the operating envelope of this helicopter even further. The swiveling landing light controlled from the cockpit in addition to the nose landing light certified with the basic helicopter. Metal skis, 1.5-m long and weighing 8 kg enable the helicopter to take off from and land on all snow-covered ground. Windshield wipers are also available; this single system consists of an electric motor and 2 wipers that can be removed as required.
In addition to these new installations, several other optional equipment items are available for the EC 120B Colibri. The most popular with operators are the dual flight controls and the comfortable interior trim. The other main installations include the air conditioning system, the emergency flotation gear, radio-navigation equipment, the sand filter, the electrically operated multi-directional mirror and the sling
It should be noted that the present fleet has logged more than 11,000 flight hours. The maintenance for this helicopter is based on accessibility and cost reduction and is therefore very light. In between the scheduled inspections, it can be carried out directly by the pilot, without any special tooling.
The technical publications are supplied on CD-ROM offering very flexible use with interactive electronic navigation and multi-criteria access to a regularly updated documentary database. 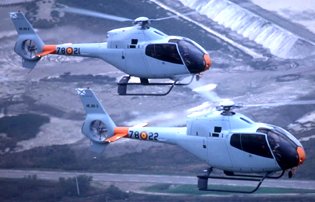 The extremely versatile EC 120B Colibri is also ideal for pilot training missions. This was clearly illustrated in Madrid last December, when the Spanish Air Force signed a contract for fifteen EC 120B Colibris
This helicopter is built in cooperation with CATIC in China and Singapore Technologies Aerospace. Eurocopter is the technical leader of this program with a 61% share, CATIC has 24% and STAe 15%.
Eurocopter is a 100-percent subsidiary of EADS (European Aeronautic Defence and Space Company). EADS was formed in July 2000 through the merger of Dasa, Aerospatiale Matra and CASA of Spain, thus becoming one of the three leading companies in the aerospace and defence sector worldwide.