( Eurocopter Press Release ) - The first EC635 destined for the Swiss Air Force successfully performed its maiden flight at Eurocopters Donauwörth facility on May 23. The program, which foresees the delivery of a total of 18 EC635 for transport and training missions and two EC135 for Federal Air Transport Services and for which the contract was signed in April 2006, is fully on schedule. The EC635s/EC135s will successively replace the Swiss Air Forces Alouette III helicopters.

The maiden flight was under the command of Eurocopter test pilot René Nater and lasted 35 minutes. All of the aircrafts systems operated to full satisfaction. Following the first flight, the EC635 will return to the production facility for the qualification of customer-specific equipment and further tests.
Deliveries of the helicopters will take place between March/April 2008 and the end of 2009. The first four machines will be delivered from Eurocopters facility in Donauwörth, while the remaining 16 aircraft will be assembled and delivered by RUAG Aerospace in Alpnach, Switzerland. RUAG will also be responsible for the industry level maintenance of the Swiss Air Forces EC635s/EC135s throughout their service life.
Certified in 2001, the EC635 is the military version of the highly successful light twin-engine EC135 helicopter. It is one of the most versatile helicopters on the market today. It is designed to carry out military/paramilitary and public security missions, also including search and rescue, troop transport, reconnaissance/observation, scout missions, training and vertical replenishment. The EC635 is also ideal for disaster relief and humanitarian aid missions, for medevac and for the transport of loads, medical supplies and food.
Its internal equipment can be easily interchanged. For instance, the user can select one of several seating layouts, or install medical apparatus. The roomy 4.6 cubic-meter cabin is free of obstacles. Cabin access is via two lateral sliding doors - plus via two large-size rear doors - a feature not offered by any of the competitors. Thanks to the two rear clamshell doors and the shrouded Fenestron® tail rotor, loading/unloading is performed in conditions of complete safety. 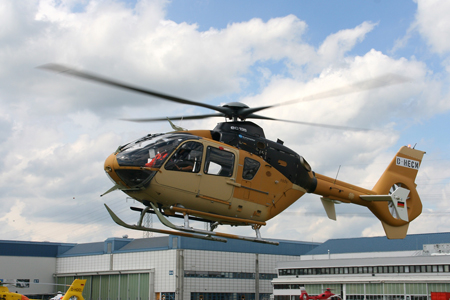 Among the exceptional qualities of the EC635 are its outstanding operational effectiveness, its day and night mission capability, including NVG missions, its high performance, and its modern maintenance concept which is particularly noteworthy. Most of the main components are subject to on-condition maintenance, which maximizes the operational availability. The first scheduled maintenance is due after 400 flight hours.


Established in 1992, the Franco-German-Spanish Eurocopter Group is a Division of EADS, a world leader in aerospace, defence and related services. The Eurocopter Group employs approx. 14,000 people. In 2006, Eurocopter confirmed its position as the worlds No. 1 helicopter manufacturer with a turnover of 3.8 billion euros, orders for 615 new helicopters, and a 52% percent market share in the civil and parapublic sectors. Overall, the Groups products account for 30% percent of the total world helicopter fleet. Its strong worldwide presence is ensured by its 17 subsidiaries on five continents, along with a dense network of distributors, certified agents and maintenance centres. More than 9,800 Eurocopter helicopters are currently in service with over 2,500 customers in 140 countries. Eurocopter offers the largest civil and military helicopter range in the world.
100 years of vertical flight
In 1907, Paul Cornu performed historys first ever vertical flight. Since then, thanks to pioneering spirits, technological advances and innovative minds, the helicopter has become a key to saving lives, protecting citizens and contributing to economic development the world over. In 2007, Eurocopter is proud to celebrate this anniversary and to share its passion for helicopters.